molly has discovered the dogs 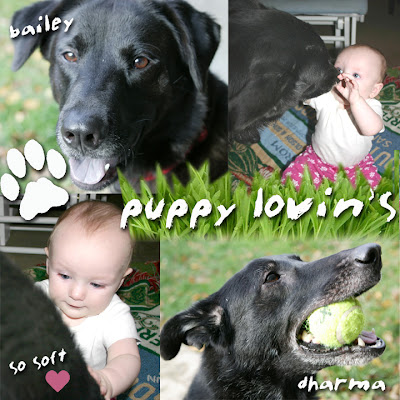 Molly's obsessed with the dogs now. If one of them is in the room, there is to be no playing, no nursing, no eating while she stared with rapt interest at her beloved furry giant. When they are close, she is overwhelmed and can't decide whether she is in bliss or is just a little scared. It's the sweetest thing I've ever seen.

It makes me feel terrible, though, to realize how the poor dogs have plummeted in my attentions since Molly was born. They were our babies, now... not so much. They are great dogs, though.

Dharma: 10 years old, German Shepherd/Black Lab. Smart, sweet, with a soul deserving of her lovely Buddhist name. When she was a pup, they lived in a van and tent by the New River, and Shane was reading The Dharma Bums. She was Shane's main woman until I came along. After initial hesitation, I was adopted as a mommy with great enthusiasm. During my pregnancy, she watched over me like an angel.

Bailey: 5 years old. We inherited her from Shane's brother, who was our roommate until just before our wedding. The Boo (Bailey is the Boo of our home with the simplest spelling. Molly is the Boue, Shane's Bu, and I'm Bew) is just as sweet and affectionate as she is stupid. That's harsh, but she's not the brightest. She is our teenage rebel, and has a shaggy little boyfriend who's family has to walk her home a couple times a week.
by Heidi

Email ThisBlogThis!Share to TwitterShare to FacebookShare to Pinterest
Tagged collages