molly's shout out & books you never thought i'd mention 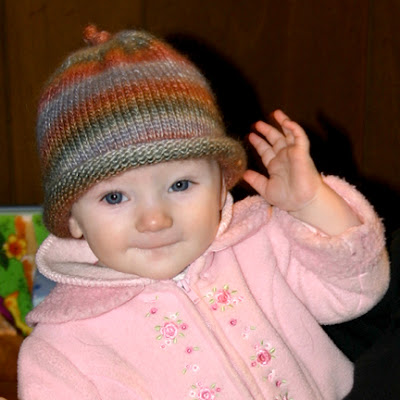 Molly waves "Hi!" to Marianne. Thanks for the *beautiful* hat. We finally got her to leave it on for a trip out by taking off the (adorable!) ribbon. The wave thing is the cutest thing ever. She knows the word "Hi" means to wave her itty bitty arm and sometimes she groks "Bye Bye" too. So far, there is not a sign of Mama-leaving-trauma, mostly because she's so bonded with the Grandies.

Speaking of the Grandies, Papaw heard me talking about The Hillary's run for the White House and decided that I should read Rewriting History, as well as Hating America and something by Bill O'Reilly. I grinned and said "I don't know if I should read these- they may piss me off." He insisted I'd find them very good and I replied, "I don't think you realize how liberal I am." He said, "If you're that liberal, you're in trouble, honey." (He loves me even though I'm a tattoed Goddess worshipping Hillary lover.) I told him that yes, actually I was "in trouble" politically because I am indeed so radical that I will see little or none of my favorites in office in my lifetime. He said something about Social Progressivism, and I said, "Um, yeh, like supporting gay marriage and the like?" His answer was, "No, not necessarily. Social Progressives want to change everything and they are against traditionalism."

The books are in the bathroom with the good ol' King James, old parenting mags, and my cheesier "Wicca 101" books- where things that I am interested in but not very much go to live and be perused idly while I do bathroomy things. I chatted happily with Bu about what books from my collection I could offer in trade. We decided lesbian erotica would be best:)

Email ThisBlogThis!Share to TwitterShare to FacebookShare to Pinterest
Tagged photos, politics, the grandies