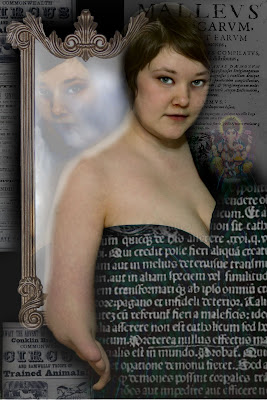 Thordora's giving away an intriguing book about genetic mutations to a random reader who blogs about her/his own oddity. The post came a few days after a photoshoot with Bu when I noticed that I was always turning my arm away from the camera. I have had a tension between embracing the strangeness that is my body and wanting desperately to fade into the background. I've never made art about my birth defect, and it seemed like a perfect chance to explore it a little. 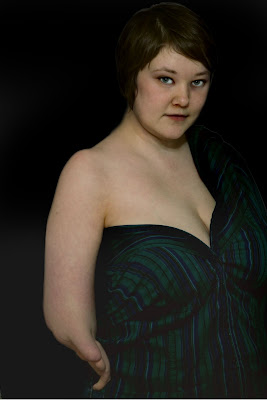 The photo Bu took is really beautiful I think, and it's weird how that surprises me. The digital collage is filled with personally empowering symbols... text from the Malleus Malleficarum, the book used by medieval witchfinders alludes to my neverending gothgirl delight that in more ignorant times my arm might have been called a "devil's mark." The Hindu god Ganesha is the patron Lord of the deformed and they served as priestesses in His temples. The mirror, a stormy sky, just moody layers. An atique ticket to a circus, because I love the idea of being freaky today. I'm showing you the simple file beneath, too- because I didn't want to hide under a Photoshop veil.

As far as genetics, there's never been a real answer. It kind of looks like Amniotic Band Syndrome, but I had some organ deformities too which can't be explained that way. I had a wall separating my uterus and vagina in two which had to be operated on. The scarring is a huge reason Molly's birth was complicated... I also have three kidneys. I remember waking in the night early in pregnancy in a cold terror that Molly would have my birth defects, and being so confused and confounded by feeling so scared. It seemed like that worry undermined my own sense of comfort with my body. When the nurse told me she saw one hand in her mouth and one by her side, then counted tiny shadowy fingers with me the relief was amazing.
When I was little, I thought my arm looked like a baby elephant, and it became a nickname, and later, another reason to love Ganesha.