make a note of it 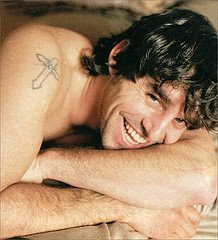 This is the best homoerotic quote from a straight guy in the history of the hoomans: "If I were to taste man, it would be Michael Phelps," Nicholas Brendan whom I know (and lurve) as Xander.He said taste man. And Michael Phelps. *drool gurgle die*

There has been much discussion in my life lately of Mr. Phelps' phenomenally beautiful physicality. This does not mean that I'm not boycotting the Olympics. Because I am- in a Tibet loving and unofficial quiet way, mostly because I didn't want to make a big bloggy deal out of it and have to do reasearch to support my whinging because I think if I'm blogging politically there should be a well-linked bibliography. But if you're keeping score about Things I Find Distasteful and/or Maybe Horrific, do please include most things the Chinese government has done since um, let's just say at least 1940? 30? ever?, so (again) I don't have to work. Shit... they probably did some awesome uplifting thing in 1947 or something that makes me look like an uneducated fucker. But I'll never know because I am NOT doing research for this rant.

There was a pretty boy with a Sanskrit tattoo in my World Since 1850 class. Erm.

When I write about brief mentions of guys having guy lust, alls I have to do is attribute one tiny quote. It's all much easier and less upsetting. And also delicious.

(Photo swiped from Yummy Sushi Pajamas, and who knows where she got it but zowee is that an awesome blog title and MuchLoveAgainToTheBuffyverseAmen and also her blog is too touching to be dismissed as cute and I'm going to go read more of it and comment OK.)
by Unknown