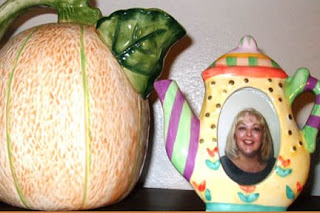 I started collecting teapots after mom died. She'd been collecting them, too relatively recently to her death. The reason for her fondness for them is hysterical- she and her internet boyfriend had a running joke and apparently "teapot"was an anatomical nickname... yeah.

That's her in the frame. The boyfriend... it was complicated... my official stance is that he Was A Dickhole.  But, I'm convinced the cyber love goddess sent him to us so she'd snap photos like this with her webcam- prior to Mr. Teapot Short and Sto- (oh holy god, mom... ew!!!!) she was very camera shy. All of the recent photos I have of her were taken for his benefit.

The cantaloupe tea pot (or pitcher I guess but I'm repurposing* it as a teapot) was up on a high shelf in Grandma's kitchen. We are slowly beginning the process of sorting through her stuff. She's doing well, by the way... but her living space is now half of one room, so things like cantaloupe teapots are superfluous and should be in the hands of blogging granddaughters.

*What a pretentious bullshit phrase. It drives me insane. We re-use things, or we just use them as is more often the case on design shows where something is retained for the new design. If you repainted it or reupholstered it, those are lovely words. Use them.
by Unknown