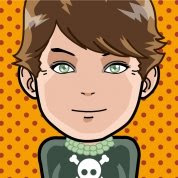 So this is me, cartooned. I'm crestfallen about her lack of nose ring- blame faceyourmanga.com. I could have a labret or a cheek stud or a ring in my eyebrow but no nose ring. It's tragic.

I'm too lazy to 'Shop it in, as evidenced by the fact that I'm shitting away hours creating avatars on the internet. I'm also, according to my husband, a hopeless dork because I'm about to watch Helvetica which, yes, is an entire documentary about a font.

In the morning, I have a friend date with a real live person who I met in real actual life, but who is a Twittering, G-Talking, groovy hip chick. (We're having crepes, which I love but I've only ever eaten my own and so how would I know if mine suck?) Funny thing, the meeting of BloodLossGirl. We heard tales of each other for months through the thrift store girls. BSG worked there after I got my desky job, and we'd always miss one and other when I shopped. They said we were so much alike the world would maybe end in one of those paradox jobs if we were in the same room. And then one day we were, and we talked, and it was good. When she handed me a scrap of paper with six or seven places I could find her online I swooned:)
by Unknown

Email ThisBlogThis!Share to TwitterShare to FacebookShare to Pinterest
Tagged design and aesthetics, life of daisy