my reaction to the RNC, Palin's speech, media circuses, and the blogosphere. um... part one.

I watched the latter half of Rudy's speech and the first half of Palin's. Sometime after the asinine pit bull joke and the infuriating derision of Obama's community organizing efforts, I stroked out and flipped off the telly to dive into Twitter seeking solace among my peeps. I read the text of the speech on Huffington Post (there's video too) this morning, and have looked over several reactions including this thread on Feministing and more I'll get to later.

My impression, as I sat staring with disbelief, was that the difference in tone between the DNC and RNC, totally disregarding content, was striking and almost shocking. The speakers at the DNC used uplifting and inspiring rhetoric paired with (at least in Obama's case) practical, specific policy plans. When negative language was used, it was used against policies and the current administration. But the overall flavor was a positive call to change.

The RNC struck a decisively different pose. The voice there was scathing and mocking and cocky. Allegations made by liberals not at all endorsed by the Obama/Biden camp were attributed to the Democratic campaign, and a stance of jeering condescension was used whenever anyone referenced Barack Obama.

I watched a hyped-up crowd chanting "Drill, Baby, DRILL" and physically recoiled. I wouldn't feel much more horrified if they'd have yelled "Rape THE Earth! Rape THE Earth!" And the insane thing? Their golden boy is against offshore drilling. The whatthefuckery is still tangled in my brain. I heard some Republican on NPR the other day talking about how they know he'll come around and it sounded like he was being assimilated by the Borg. 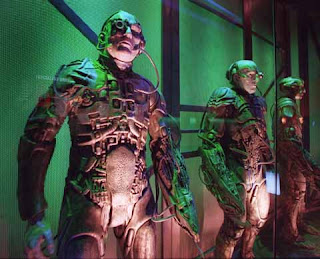 I'm deeply shaken and worried about the Republicans' apparent ease at playing very, very dirty politics. It seems to work disturbingly well. I've ordered a copy of One Party Nation so I can learn more about how the conservatives took over my fucking country have maintained power for a long time. They are massively successful at uniting their base. Massively. Did I say 'Borg' yet? When I examine that, I am actually proud of the left for apparently having a more diverse field of opinion but I wonder if we can unite against....

and then the combative language of "common enemy" and the ideas of all I'm willing to sacrifice (like a strongly pro-LGBT agenda, like putting up with religious language that alienates me completely, like I *justnow* found out Obama is pro-death penalty) make me feel disillusioned all over again. But of course I realize that change happens so. fucking. slowly.

I don't think the answer is to sink to that level, but I don't know what the answer is. How one functions in the political arena is totally beyond my understanding. The constant song and dance of getting out a message and trying not to offend anyone... it's all so intricately artificial and confused.
by Unknown

Email ThisBlogThis!Share to TwitterShare to FacebookShare to Pinterest
Tagged activism and political