This is me, poking my head up in the horizon of the blogosphere like a prairie dog popping up on a prairie somewhere. Let me say, in the interest of stream of consciousness, that flat land is just weird. When I was in Wisconsin one weekend in a young, stoned immaculate summer I thought I'd fly up into the air and be snatched off the earth for lack of mountains' gravity holding me in. The sky was actually frightening in its beautiful massiveness. Yes: when I'm high as a kite, I'm afraid of the sky. And now we know why I stick to drinking these days. 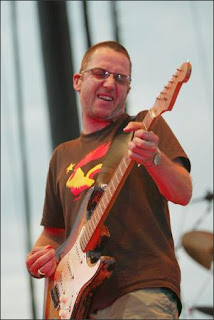 Had a moment of awe chugging coffee at work today: it's my own chemistry now. There is no more math to see how long the caffeine or alcohol will stay in my fluids- my fluids are all mine. I wondered if I'd get any milk if I pumped right now. Molly hinted last night, pulling my shirt down to show massive cleavage, and saying sing-song "the sun's up!" I said, "Yeah, it's daytime, but mama's milk's all gone. You're a big girl now." She smiled and went on playing. I exhaled in relief. Don't know if I'd let her if she asked now, after a week or two, but I'm not keen on denying her if she gets jonesey for her nunums.

I bailed out of the office at 2:00 today. I've worked 12 straight days (the last three coming home to an hour or two of design work) then I have another booth-working day for my organization Saturday. I decided I deserved to fold & staple my mailing in the comfort of my own Buffyverse for the rest of the day.

My allergies are in the worst state since I was small and got a weekly shot from a cool nurse who gave me gaudy toy rings then later from my mom after she practiced injecting oranges for a few days. Nothing's helping but Benadryl, so I've been, to revisit the stoner theme again, stoned. Stony McStoneriffic Stonedood. I used to have a kitteh called Stoney. His official name was Stonehenge, but really he was named after Stone Gossard. By the way, how interesting that I'm now in my thirties, Stonehenge is dead, and I'm not even a little bit in a group marriage with Stone Gossard and Eddie Vedder. Fascinating.
by Unknown

Email ThisBlogThis!Share to TwitterShare to FacebookShare to Pinterest
Tagged life of daisy