One of my life's great frustrations is living at (or excruciatingly near) the bottom of the cultural barrel. Before teh webs, conventional wisdom held that it took 10 years for emerging cultural thought, pop fads, fashion, and the like to trickle down to us. I predict an even longer wait before my fellow mountainy peeps get on the BGLT awareness train. (Speaking as a whole here. There is a cozy pocket of queer support in Charleston; but it's eensy.)

So, from my perspective of waiting and feeling defeatist about my traditionalist state it's annoying to watch a progressive state undergo an attempt to roll back that progression and freedom. If you're in  Cali, vote motherfucker vote. If you're in WV, dance motherfucker dance for me at Trax or Broadway some night, because I am too damn tired now to be a glittery quasi babydyke like I used to be. And if you have a home in blogtopia, write motherfucker write. 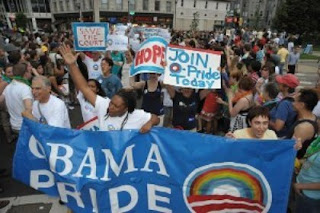 Vote for Obama. His positition on the BGLT family sucks much less.
by Unknown