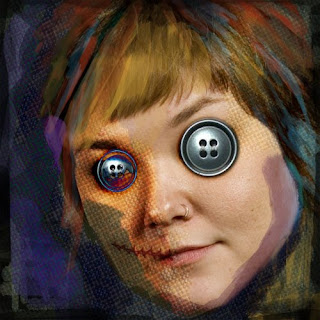 Fan art I don't do because I feel like time would be better spent creating things wholly my own. However, for movie premiers that are the equivalent of the Superbowl I (apparently) make exceptions. So here is my Coraline fangirl fun art, in its entirety. (A tighter crop in brighter colors is my new face on Twitter.) Since I made the leap of fangirliness, I invoked Delirium too just for kicks. And, OK, Sally as well since Henry Selick directed Coraline too:D

I think that a Neil Gaiman film adaptation is a peachy reason to put black streaks in my hair, celebrating he who is only wearing black until they invent a darker colour. I very nearly bought some dye after dropping Bu at work. (I have MOAR SNOW DAY! Hence the playing.) Unfortunately, I don't think our budget allows for both a (gasp! horrors!) non-matinee movie night and excellent goth hair.
by Unknown