How to Go Vegan: The Transitive Property of Coffee 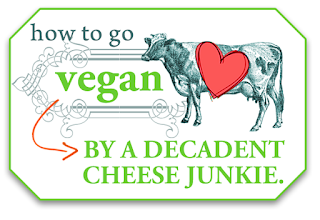 Welcome to a new series of Reality Blogging posts, which is a genre I just invented but which is pretty redundant as most bloggers are blogging their realities.

I decided that it's time to commit to heading in a vegan direction, if you will, after knowing for years that this is the diet my body needs and my heart wants. Dairy does bad things to my digestive system and skin, and it triggers my asthma and allergies. I'm not even touching the animal compassion thing with links or statistics because all we'll hit is pETA websites with sensationalist, tabloid looks and blatantly biased research. Suffice it to say that I personally believe domesticated (or, um all of those which haven't got icky exoskeletons) animals should be treated with dignity and compassion and that we humans are mammals; ergo we wean and then we eat healthy foods. We do not, biologically, have any business messing with fatty, highly caloric milk after maturity. So, yeah... to the funny now?

The tone of my 'How to Go Vegan' posts probably will be more irreverent than most people who'd write such things. There's such a purist element in that community, but a huge part of this diet transition is, for me, all about being less purist and more mindful and intentional. Going to a place of eating less animal foods consistently is more important to me than getting obsessive and then breaking down with a pizza binge.

Another note:
You can pry my sushi out of my gnarled, dead hands. Because I've vowed to The Great Dionysian Forces of Delight that always in my life there will be occasional sushi treats.

Onward to the actual content: I've discovered a great law of foodieness: The Transitive Property of Coffee. This rule reveals that all those foods I've always thought of as eternally married to milk are also great coffee foods! I stumbled on this rule while snacking on peanut butter one morning as I made Molly's lunch. I washed it down with my morning coffee, and had the epiphane. It was suddenly so obvious that all those sweet things I "need" milk for dunking or mitigating richness and sweetness were so beautifully paired with coffee instead. And coffee has like a trillion more benefits than milk. Doesn't it do the anti-oxidant thing? And it can possibly reduce your chances of developing Parkinson's and Alzheimer's diseases? (Seriously, there are studies.) Not to mention that milk doesn't jack your brain power right up into the motherfucking SKY or pump you full of pure, caffeinated awesome. Coffee is a ritual practically mandated by my genes and my church even. (Google UUs and coffee and be washed in the worshipful bliss.) I know I've recently mentioned my anxiety is in high gear, but I've gone off caffeine and it didn't bring my crazy down even one notch. So hail to the bean, and dunk your egg-free cookies in that delicious, dark elixir of yum. As I write, I'm finishing up a toasted banana peanut butter sandwich with my Joe.

What's your favorite coffee food?
Are you doing any diet changes you want to share?
Any vegan tips to contribute?
Do you use milk or cream in your coffee? Because grow up, dude.* I kid- what's you're favorite non-dairy substitute?

*Heh, OK, I am a purist. I believe strongly in plain, black coffee.
by Unknown

Email ThisBlogThis!Share to TwitterShare to FacebookShare to Pinterest
Tagged food, how to go vegan, metablogging, vegetarian