I'm tiptoeing into fiction, as promised. I abandoned a fanfic thing {again} after I got bored with other people's characters {again}. But it got the prose thing stuck in my brain, and I wrote a short story that's pretty cool after a dream that was actually a whole story. (Interestingly, I'd just read several statements about stories and dreams being quite different in Neil Gaiman's introduction to Fragile Things.) The DreamStoryThing has real friends in it, and I wrote it with their real names. I'm waiting for permission from the second sister-friend to use her and her family's names or to swap in alter egos, and then I'll publish it here.

I'm now researching demonology for a story I've wanted to write for over a year. I have no plot and none seems to want to pop into existence, so I'm going to try to seduce one into being by free writing about my characters. One of them is obviously a demon. One of them is too obviously me, so I'm trying to suss her out as well and let her have her own life.

Meanwhile, I'm also drawing as near to daily as I can, and posting them on Instagram. This one is from last night, and started with a quote from Fragile Things and a promise to Molly that I'll draw more hilly West Virginia doodles for her. She's a little bummed that I donated her favorite paintings to a fundraiser, but she'll learn eventually that being an artist means letting your art go elsewhere, often in exchange for money. 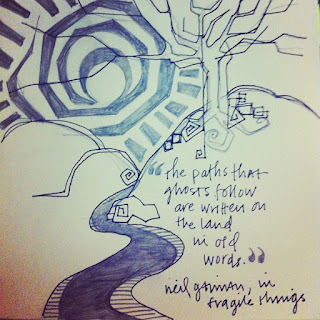 And now {FOCUS!} I'm working on the neglected Etsy shop, so the world can be populated with more doodles and I can make money. Um... After I play with my new demon.
by Unknown