When Wasps Are Given Colored Paper, They Build Rainbow Nests 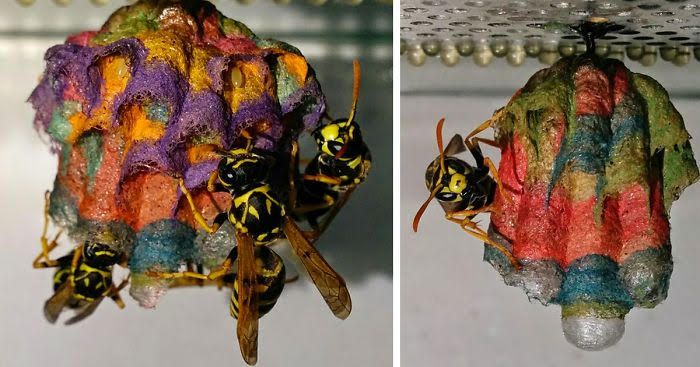 I found this when I was researching how to preserve a wasp nest I’d found. I’ve made friends with some super chill yet tragically suicidal wasps. It was a whole hero's journey archetype deal. I, obviously, am the badass hero.

Early in the summer, the wasps would launch a guerrilla atttack. One or two would sneak into the bedroom via a small crack left from installing the air conditioner. Then I would flip my shit, as you do if you have entomophobia. And I do. A bit. Or I did. Whatever. Story happening... focus.

So the wasps have a quest as well. Their mission, evidently, is to land on the other window, and then hang out on the blinds until they die pretty quickly. I let one out by scooting the screen open but climbing onto the bed and tugging in a weird motion hurt my back and scared the shit out of me so now I am just letting them do their fry-in-the-sun's-rays suicide.

And now it's late August. Either by exposure therapy or Stockholm Syndrome I've ceased to fear the wasps. They ignore me and I them and all's well but for the daily mass bug suicides.

SO THEN, yesterday morning I was walking Finn in my yard and on my porch lay a lovely, perfect wasp nest. It was definitely a present from my wasp colony. A Facebook friend called me the Wasp Whisperer and I am super into that. 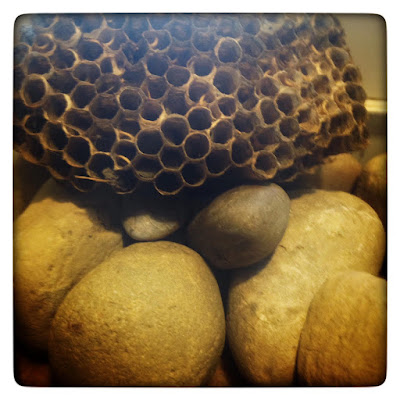 My research taught me that these paper nests can last pretty much forever, but I think it's going to end up in an assemblage or collage so I'm going to spray it with a varnish.

I'm so happy about this little thing. It was like when I find a lovely feather but even groovier for its uniqueness.

Goddamnit, no fucking lie, a colossal wasp just landed on my laptop monitor. I was elated, for how amazing would a photo of that be to include here!? But I scared him away by reaching for my phone. Then I tried to call him back like he's a dog because I am a wackadoo.
by Heidi Richardson Evans